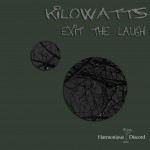 Harmonious Discord is pleased to announce its 10th release with an artist we feel shatters convention at every opportunity. Over the past 5 years Harmonious Discord has been a favorite for abstract DJ’s in the know with releases from artists like Morgan Page, Rithma, Jacob London, Merrick Brown and Demarkus Lewis. During our 5th release we received a remix from an artist that blew us away, and since then we have been itching to work with him artist in a greater capacity. We felt it only proper that we celebrate our 10th release with an artist we feel is changing the landscape of electronic music — KiloWatts.

The project kicks off with a heady, sharp, staccato tech house tune with dancefloor crumbling bass! Eveglade is a wintery and hypnotic pallet of strange sounds clashed with melodic swells. Like a trip through a forest, it changes and morphs from a light jazzy atmosphere to an intense synth-ridden banger! San Francisco’s Alland Byallo gives his signature spacey techno rework to Everglade. Dubby drums and covert chords rattle as this late night rework chugs along sending listeners into an unfocused reality.

On the flip KiloWatts offers a drummy minimal techno tune with plenty of gnarling bass and glitched out pops! Exit the Laugh has a clockwork orange feel with haunting melodies and scary music box leads. Keeping with the astranged scenery, Well Tempered Weirdness is a dancefloor timebomb. This tune starts out mellow and well-mannered, but soon builds into a swirl of naughty circus dreams with immense filtered strings and and various other sonic abnormalities.

KiloWatts
“At the forefront of innovation is an artist that has made splashes in every major electronic medium over the past 6 years. Be it breaks with his remixes of Eve Falcon and The Carbon Community as well as a colab project named Skeetaz; Downtempo/Trip Hop with his latest full length release on Native State; Tech House with releases on OM, Dirty Bird, and Thoughtless; or his wildly popular glitch-pop band alongside german guitarist and songwriter Vanek with the release of their second full length “Focus and Flow”. His cutting edge sound is testament that in the near future James will be a heavy force in the electronic music community.”

He’s been called “San Francisco’s very own tidal wave of techno”, and for good reason.

Alland Byallo is one of the busiest men in the San Francisco techno community. Having produced electronic music for over 10 years and DJing for nearly as long Alland come to be an international talent, releasing music on respected US and European record labels such as Liebe*Detail, Floppy Funk, Dirtybird, and Utensil Recordings, and headlining events all over. His music, a blend of old and new elements of techno, house and minimal, is regularly charted and has been licensed to CD’s released by Universal and Proton Music.

Check out his music and tour dates @ www.AllandByallo.com